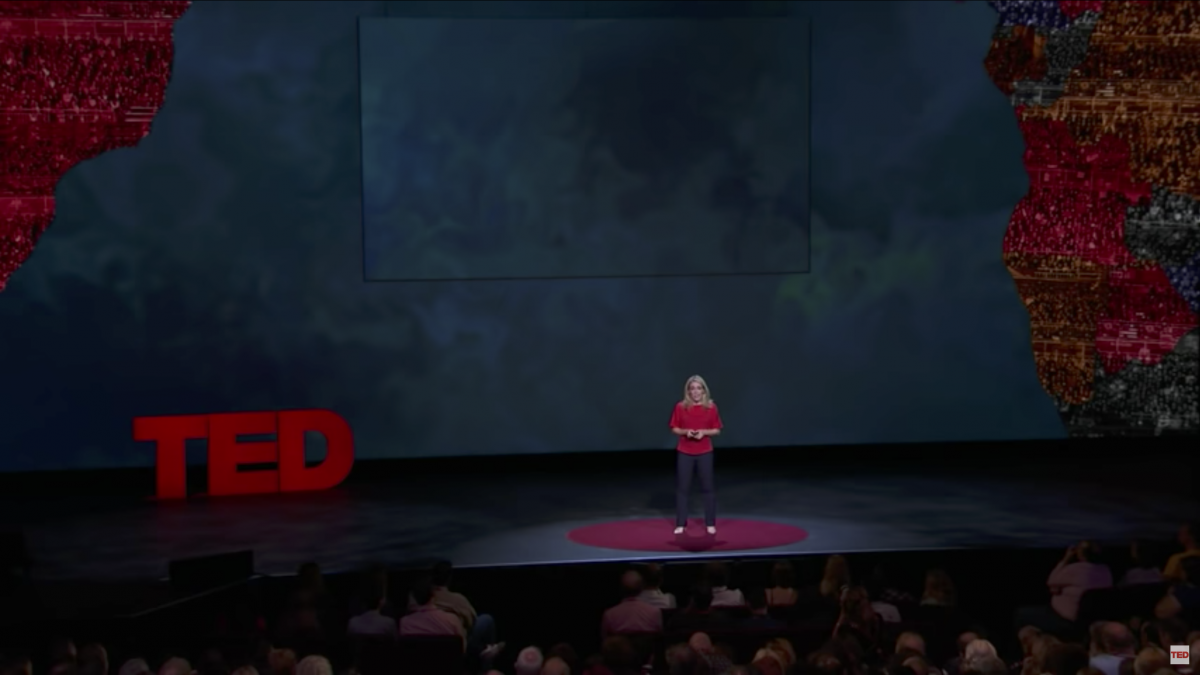 There’s a man out there, somewhere, who looks a little bit like the actor Idris Elba, or at least he did 20 years ago. I don’t know anything else about him, except that he once saved my life by putting his own life in danger. This man ran across four lanes of freeway traffic in the middle of the night to bring me back to safety after a car accident that could have killed me. And the whole thing left me really shaken up, obviously, but it also left me with this kind of burning, gnawing need to understand why he did it, what forces within him caused him to make the choice that I owe my life to, to risk his own life to save the life of a stranger? In other words, what are the causes of his or anybody else’s capacity for altruism?

But first let me tell you what happened. That night, I was 19 years old and driving back to my home in Tacoma, Washington, down the Interstate 5 freeway, when a little dog darted out in front of my car.And I did exactly what you’re not supposed to do, which is swerve to avoid it. And I discovered why you’re not supposed to do that. I hit the dog anyways, and that sent the car into a fishtail, and then a spin across the freeway, until finally it wound up in the fast lane of the freeway faced backwards into oncoming traffic and then the engine died. And I was sure in that moment that I was about to die too, but I didn’t because of the actions of that one brave man who must have made the decision within a fraction of a second of seeing my stranded car to pull over and run across four lanes of freeway traffic in the dark to save my life. And then after he got my car working again and got me back to safety and made sure I was going to be all right, he drove off again. He never even told me his name, and I’m pretty sure I forgot to say thank you.

So before I go any further, I really want to take a moment to stop and say thank you to that stranger.

I tell you all of this because the events of that night changed the course of my life to some degree. I became a psychology researcher, and I’ve devoted my work to understanding the human capacity to care for others. Where does it come from, and how does it develop, and what are the extreme forms that it can take? These questions are really important to understanding basic aspects of human social nature. A lot of people, and this includes everybody from philosophers and economists to ordinary people believe that human nature is fundamentally selfish, that we’re only ever really motivated by our own welfare. But if that’s true, why do some people, like the stranger who rescued me, do selfless things, like helping other people at enormous risk and cost to themselves? Answering this question requires exploring the roots of extraordinary acts of altruism, and what might make people who engage in such acts different than other people. But until recently, very little work on this topic had been done.

The actions of the man who rescued me meet the most stringent definition of altruism, which is a voluntary, costly behavior motivated by the desire to help another individual. So it’s a selfless act intended to benefit only the other. What could possibly explain an action like that? One answer is compassion, obviously, which is a key driver of altruism. But then the question becomes, why do some people seem to have more of it than others? And the answer may be that the brains of highly altruistic people are different in fundamental ways.

But to figure out how, I actually started from the opposite end, with psychopaths. A common approach to understanding basic aspects of human nature, like the desire to help other people, is to study people in whom that desire is missing, and psychopaths are exactly such a group. Psychopathy is a developmental disorder with strongly genetic origins, and it results in a personality that’s cold and uncaring and a tendency to engage in antisocial and sometimes very violent behavior. Once my colleagues and I at the National Institute of Mental Health conducted some of the first ever brain imaging research of psychopathic adolescents, and our findings, and the findings of other researchers now, have shown that people who are psychopathic pretty reliably exhibit three characteristics. First, although they’re not generally insensitive to other people’s emotions, they are insensitive to signs that other people are in distress. And in particular, they have difficulty recognizing fearful facial expressions like this one. And fearful expressions convey urgent need and emotional distress, and they usually elicit compassion and a desire to help in people who see them, so it makes sense that people who tend to lack compassion also tend to be insensitive to these cues.

So all of these findings are reliable and robust, and they’re very interesting. But remember that my main interest is not understanding why people don’t care about others. It’s understanding why they do. So the real question is, could extraordinary altruism, which is the opposite of psychopathy in terms of compassion and the desire to help other people, emerge from a brain that is also the opposite of psychopathy? A sort of antipsychopathic brain, better able to recognize other people’s fear, an amygdala that’s more reactive to this expression and maybe larger than average as well?

As my research has now shown, all three things are true. And we discovered this by testing a population of truly extraordinary altruists. These are people who have given one of their own kidneys to a complete stranger. So these are people who have volunteered to undergo major surgery so that one of their own healthy kidneys can be removed and transplanted into a very ill stranger that they’ve never met and may never meet. “Why would anybody do this?” is a very common question. And the answer may be that the brains of these extraordinary altruists have certain special characteristics.They are better at recognizing other people’s fear. They’re literally better at detecting when somebody else is in distress. This may be in part because their amygdala is more reactive to these expressions.And remember, this is the same part of the brain that we found was underreactive in people who are psychopathic. And finally, their amygdalas are larger than average as well, by about eight percent. So together, what these data suggest is the existence of something like a caring continuum in the world that’s anchored at the one end by people who are highly psychopathic, and at the other by people who are very compassionate and driven to acts of extreme altruism.

But I should add that what makes extraordinary altruists so different is not just that they’re more compassionate than average. They are, but what’s even more unusual about them is that they’re compassionate and altruistic not just towards people who are in their own innermost circle of friends and family. Right? Because to have compassion for people that you love and identify with is not extraordinary. Truly extraordinary altruists’ compassion extends way beyond that circle, even beyond their wider circle of acquaintances to people who are outside their social circle altogether, total strangers, just like the man who rescued me.

And I’ve had the opportunity now to ask a lot of altruistic kidney donors how it is that they manage to generate such a wide circle of compassion that they were willing to give a complete stranger their kidney. And I found it’s a really difficult question for them to answer.

I say, “How is it that you’re willing to do this thing when so many other people don’t? You’re one of fewer than 2,000 Americans who has ever given a kidney to a stranger. What is it that makes you so special?”

And what do they say?

They say, “Nothing. There’s nothing special about me. I’m just the same as everybody else.”

And I think that’s actually a really telling answer, because it suggests that the circles of these altruists don’t look like this, they look more like this. They have no center. These altruists literally don’t think of themselves as being at the center of anything, as being better or more inherently important than anybody else. When I asked one altruist why donating her kidney made sense to her, she said, “Because it’s not about me.” Another said, “I’m not different. I’m not unique. Your study here is going to find out that I’m just the same as you.”

I think the best description for this amazing lack of self-centeredness is humility, which is that quality that in the words of St. Augustine makes men as angels. And why is that? It’s because if there’s no center of your circle, there can be no inner rings or outer rings, nobody who is more or less worthy of your care and compassion than anybody else. And I think that this is what really distinguishes extraordinary altruists from the average person.

But I also think that this is a view of the world that’s attainable by many and maybe even most people. And I think this because at the societal level, expansions of altruism and compassion are already happening everywhere. The psychologist Steven Pinker and others have shown that all around the world people are becoming less and less accepting of suffering in ever-widening circles of others, which has led to declines of all kinds of cruelty and violence, from animal abuse to domestic violence to capital punishment. And it’s led to increases in all kinds of altruism. A hundred years ago, people would have thought it was ludicrous how normal and ordinary it is for people to donate their blood and bone marrow to complete strangers today. Is it possible that a hundred years from now people will think that donating a kidney to a stranger is just as normal and ordinary as we think donating blood and bone marrow is today? Maybe.

So what’s at the root of all these amazing changes? In part it seems to be increases in wealth and standards of living. As societies become wealthier and better off, people seem to turn their focus of attention outward, and as a result, all kinds of altruism towards strangers increases, from volunteering to charitable donations and even altruistic kidney donations. But all of these changes also yield a strange and paradoxical result, which is that even as the world is becoming a better and more humane place, which it is, there’s a very common perception that it’s becoming worse and more cruel, which it’s not. And I don’t know exactly why this is, but I think it may be that we now just know so much more about the suffering of strangers in distant places, and so we now care a lot more about the suffering of those distant strangers. But what’s clear is the kinds of changes we’re seeing show that the roots of altruism and compassion are just as much a part of human nature as cruelty and violence, maybe even more so, and while some people do seem to be inherently more sensitive to the suffering of distant others, I really believe that the ability to remove oneself from the center of the circle and expand the circle of compassion outward to include even strangers is within reach for almost everyone.