We should aim for perfection – and stop fearing failure – Jon Bowers 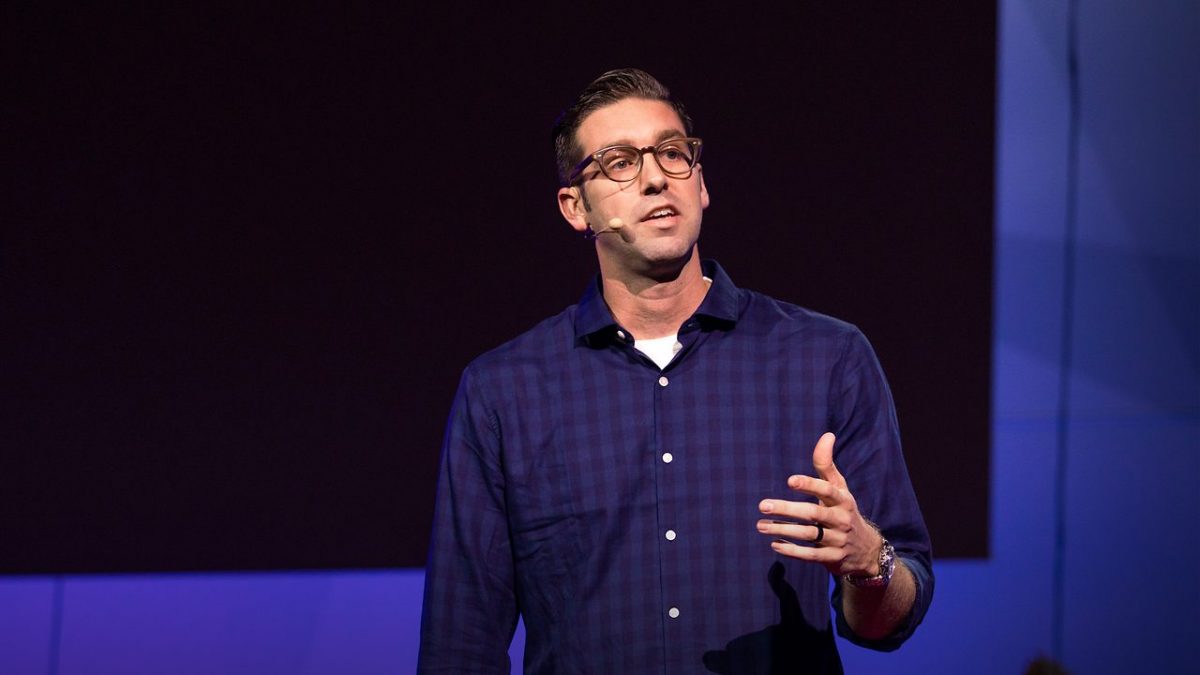 Have you ever heard of typosquatting? Well, typosquatting is where companies like Google post advertisements on websites that are commonly miskeyed, and then they sit back and rake in millions banking on the fact that you’re visiting something like gmale.com or mikerowesoft.com.

It just seems kind of silly, doesn’t it?

How about this? On February 28, an engineer at Amazon made a similar, seemingly small key error.Only I say seemingly small because this one little typo on Amazon’s supercode produced a massive internet slowdown that cost the company over 160 million dollars in the span of just four hours.

But this is actually really scary. You see, recently, an employee at the New England Compound, which is a pharmaceutical manufacturer, didn’t clean a lab properly and now 76 people have died and 700 more have contracted meningitis.

I mean, these examples are crazy, right? When did we come to live in a world where these types of typos, common errors, this do-your-best attitude or just good enough was acceptable? At some point, we’ve stopped valuing perfection, and now, these are the type of results that we get. You see, I think that we should all seek perfection, all the time, and I think we need to get to it quick.

Look, a hundred people die every day due to vehicular crashes. Think about that for a second. That’s like the equivalent of four commercial airliners crashing every week, yet we still can’t convince ourselves to pay perfect attention behind the wheel. So I teach my drivers to value perfection. It’s why I have them memorize our 131-word defensive driving program perfectly, and then I have them rewrite it. One wrong word, one misspelled word, one missing comma, it’s a failed test. It’s why I do uniform inspections daily. Undershirts are white or brown only, shoes are black or brown polished leather and frankly, don’t come to my class wrinkled and expect me to let you stay. It’s why I insist that my drivers are on time. Don’t be late, not to class, not to break, not to lunch. When you’re supposed to be somewhere, be there. You see, I do this so that my students understand that when I’m training them to drive a car and I say, “Clear every intersection,” they understand that I mean every traffic signal, every cross street, every side street, every parking lot, every dirt road, every crosswalk, every intersection without fail.

Now, new students will often ask me why my class is so difficult, strict, or uniform, and the answer is simple. You see, perfectionism is an attitude developed in the small things and then applied to the larger job. So basically, if you can’t get the little things right, you’re going to fail when it counts, and when you’re driving a car, it counts. A car traveling at 55 miles an hour covers the length of an American football field in just under four and a half seconds, but just so happens to be the same amount of time it takes the average person to check a text message. So I don’t allow my drivers to lose focus, and I don’t accept anything less than perfection out of them.

And you know what? I’m tired of everybody else accepting 99 percent as good enough. I mean, being less than perfect has real consequences, doesn’t it? Think about it. If the makers of our credit cards were only 99.9 percent effective, there would be over a million cards in circulation today that had the wrong information on the magnetic strip on the back. Or, if the Webster’s Dictionary was only 99.9 percent accurate, it would have 470 misspelled words in it. How about this? If our doctors were only 99.9 percent correct, then every year, 4,453,000 prescriptions would be written incorrectly, and probably even scarier, 11 newborns would be given to the wrong parents every day in the United States.

And those are just the odds, thank you.

The reality is that the US government crashed a 1.4-billion-dollar aircraft because the maintenance crew only did 99 percent of their job. Someone forgot to check a sensor. The reality is that 16 people are now dead, 180 have now been injured, and 34 million cars are being recalled because the producers of a car airbag produced and distributed a product that they thought was, you know, good enough. The reality is that medical errors are now the third leading cause of death in America.250,000 people die each year because somebody who probably thought they were doing their job good enough messed up. And you don’t believe me? Well, I can certainly understand why. You see, it’s hard for us to believe anything these days when less than 50 percent of what news pundits say is actually grounded in fact.

So it comes down to this: trying our best is not good enough. So how do we change? We seek perfection and settle for nothing less.

Now, I know. I need to give you a minute on that, because I know what you’ve been told. It probably goes something like, perfection is impossible for humans, so therefore, seeking perfection will not only ruin your self-esteem but it will render you a failure. But there’s the irony. See, today we’re all so afraid of that word failure, but the truth is, we need to fail. Failure is a natural stepping stone towards perfection, but at some point, because we became so afraid of that idea of failure and so afraid of that idea of perfection, we dismissed it because of what might happen to our egos when we fall short.I mean, do you really think that failure’s going to ruin you? Or is that just the easy answer that gets us slow websites, scary healthcare and dangerous roads? I mean, are you ready to make perfection the bad guy in all this? Look, failure and imperfection are basically the same thing. We all know that imperfection exists all around us. Nothing and nobody is perfect. But at some point, because it was too difficult or too painful, we decided to dismiss our natural ability to deal with failure and replace it with a lower acceptance level. And now we’re all forced to sit back and just accept this new norm or good-enough attitude and the results that come with it.

So even with all that said, people will still tell me, you know, “Didn’t the medical staff, the maintenance crew, the engineer, didn’t they try their best, and isn’t that good enough?” Well, truthfully, not for me and especially not in these examples. Yeah, but, you know, trying to be perfect is so stressful, right? And, you know, Oprah talked about it, universities study it, I bet your high school counselor even warned you about it. Stress is bad for us, isn’t it? Well, maybe, but to say that seeking perfection is too stressful is like saying that exercise is too exhausting. In both cases, if you want the results, you’ve got to endure the pain. So truthfully, saying that seeking perfection is too stressful is just an excuse to be lazy.

But here’s the really scary part. Today, doctors, therapists and the nearly 10-billion- dollar-a-year self-help industry are all advocating against the idea of perfection under this guise that somehow not trying to be perfect will save your self-esteem and protect your ego. But, see, it’s not working,because the self-help industry today has a higher recidivism rate because it’s more focused on teaching you how to accept being a failure and lower your acceptance level than it is about pushing you to be perfect.

See, these doctors, therapists and self-help gurus are all focused on a symptom and not the illness.The true illness in our society today is our unwillingness to confront failure. See, we’re more comfortable resting on our efforts than we are with focusing on our results. Like at Dublin Jerome High School in Ohio, where they name 30 percent of a graduating class valedictorian. I mean, come on, right? Somebody had the highest GPA. I guarantee you it wasn’t a 72-way tie.

But, see, we’re more comfortable offering up an equal outcome than we are with confronting the failure, the loser or the underachiever. And when everybody gets a prize, everybody advances, or everybody gets a pay raise despite results, the perfectionist in all of us is left to wonder, what do I have to do to get better? How do I raise above the crowd?

And see, if we continue to cultivate this culture, where nobody fails or nobody is told that they will fail,then nobody’s going to reach their potential, either. Failure and loss are necessary for success. It’s the acceptance of failure that’s not. Michelangelo is credited with saying that the greatest danger for most of us is not that our aim is too high and we miss it, but it’s too low and we reach it. Failure should be a motivating force, not some type of pathetic excuse to give up.

Like NBA superstar Steph Curry: he hit 77 three-point shots in a row. Think about that. The guy was able to accurately deliver a nine-and-a-half inch ball through an 18-inch rim that’s suspended 10 feet in the air from nearly 24 feet away almost 80 times without failure. Or like the computer programmers at the aerospace giant Lockheed Martin, who have now written a program that uses 420,000 lines of near-flawless code to control every aspect of igniting four million pounds of rocket fuel and putting a 120-ton spaceship into orbit. Or maybe like the researchers at the Children’s Mercy Hospital in Kansas City, Missouri, who have now developed a device that can complete human genome coding in just 26 hours. So this device is able to diagnose genetic diseases in babies and newborns sooner,giving doctors an opportunity to start treatments earlier and potentially save the baby’s life. See, that’s what happens when we seek perfection.