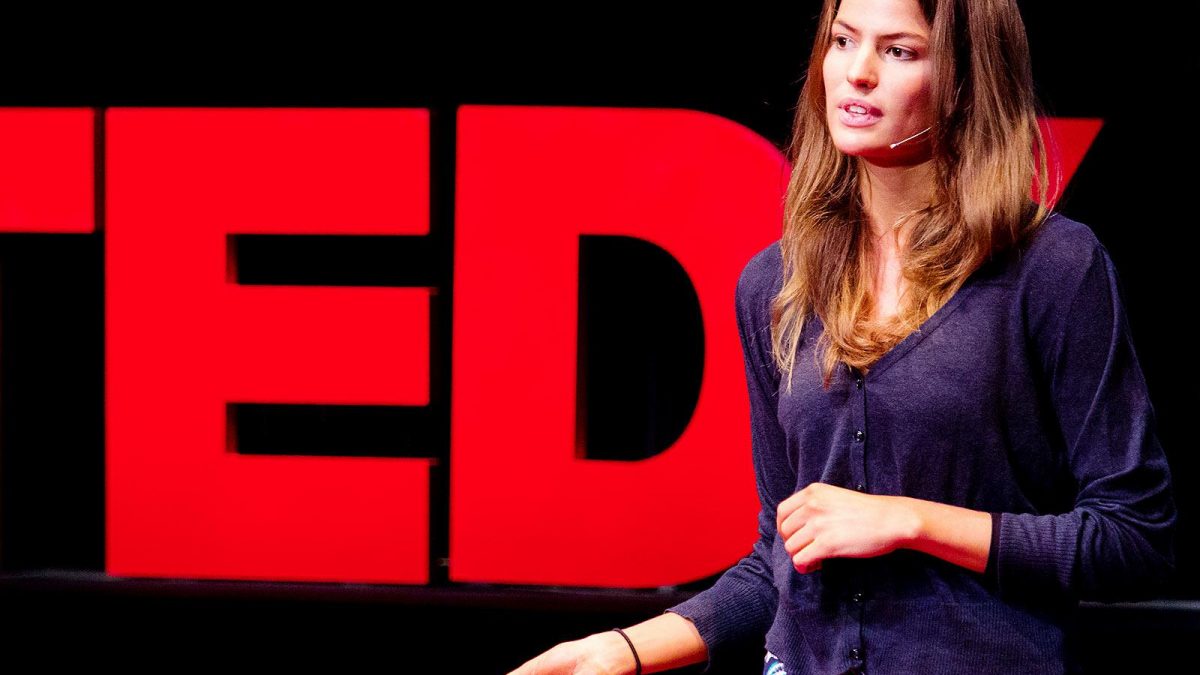 Hi. My name is Cameron Russell, and for the last little while, I’ve been a model. Actually, for 10 years. And I feel like there’s an uncomfortable tension in the room right now because I should not have worn this dress.

So luckily, I brought an outfit change. This is the first outfit change on the TED stage, so you guys are pretty lucky to witness it, I think. If some of the women were really horrified when I came out, you don’t have to tell me now, but I’ll find out later on Twitter.

I’d also note that I’m quite privileged to be able to transform what you think of me in a very brief 10 seconds. Not everybody gets to do that. These heels are very uncomfortable, so good thing I wasn’t going to wear them. The worst part is putting this sweater over my head, because that’s when you’ll all laugh at me, so don’t do anything while it’s over my head. All right.

So, why did I do that? That was awkward.

Hopefully not as awkward as that picture. Image is powerful, but also, image is superficial. I just totally transformed what you thought of me, in six seconds. And in this picture, I had actually never had a boyfriend in real life. I was totally uncomfortable, and the photographer was telling me to arch my back and put my hand in that guy’s hair. And of course, barring surgery, or the fake tan that I got two days ago for work, there’s very little that we can do to transform how we look, and how we look, though it is superficial and immutable, has a huge impact on our lives.

So the first question is, how do you become a model? I always just say, “Oh, I was scouted,” but that means nothing. The real way that I became a model is I won a genetic lottery, and I am the recipient of a legacy, and maybe you’re wondering what is a legacy. Well, for the past few centuries we have defined beauty not just as health and youth and symmetry that we’re biologically programmed to admire, but also as tall, slender figures, and femininity and white skin. And this is a legacy that was built for me, and it’s a legacy that I’ve been cashing out on. And I know there are people in the audience who are skeptical at this point, and maybe there are some fashionistas who are like, “Wait. Naomi. Tyra. Joan Smalls. Liu Wen.” And first, I commend you on your model knowledge. Very impressive.

But unfortunately, I have to inform you that in 2007, a very inspired NYU Ph.D. student counted all the models on the runway, every single one that was hired, and of the 677 models that were hired, only 27, or less than four percent, were non-white.

The next question people always ask is, “Can I be a model when I grow up?” And the first answer is, “I don’t know, they don’t put me in charge of that.” But the second answer, and what I really want to say to these little girls is, “Why? You know? You can be anything. You could be the President of the United States, or the inventor of the next Internet, or a ninja cardiothoracic surgeon poet, which would be awesome, because you’d be the first one.”

If, after this amazing list, they still are like, “No, no, Cameron, I want to be a model,” well, then I say, “Be my boss.” Because I’m not in charge of anything, and you could be the editor in chief of American Vogue or the CEO of H&amp;M, or the next Steven Meisel. Saying that you want to be a model when you grow up is akin to saying that you want to win the Powerball when you grow up. It’s out of your control, and it’s awesome, and it’s not a career path.

I will demonstrate for you now 10 years of accumulated model knowledge, because unlike cardiothoracic surgeons, it can just be distilled right now. So, if the photographer is right there, the light is right there, like a nice HMI, and the client says, “We want a walking shot,” this leg goes first, nice and long, this arm goes back, this arm goes forward, the head is at three quarters, and you just go back and forth, just do that, and then you look back at your imaginary friends, 300, 400, 500 times.

Hopefully less awkward than that one in the middle. That was — I don’t know what happened there.

Unfortunately, after you’ve gone to school, and you have a résumé and you’ve done a few jobs, you can’t say anything anymore, so if you say you want to be the President of the United States, but your résumé reads, “Underwear Model: 10 years,” people give you a funny look.

The next question is, “Do they retouch all the photos?” And yeah, they pretty much retouch all the photos, but that is only a small component of what’s happening. This picture is the very first picture that I ever took, and it’s also the very first time that I had worn a bikini, and I didn’t even have my period yet. I know we’re getting personal, but I was a young girl. This is what I looked like with my grandma just a few months earlier. Here’s me on the same day as this shoot. My friend got to come.Here’s me at a slumber party a few days before I shot French Vogue. Here’s me on the soccer team and in V Magazine. And here’s me today. And I hope what you’re seeing is that these pictures are not pictures of me. They are constructions, and they are constructions by a group of professionals, by hairstylists and makeup artists and photographers and stylists and all of their assistants and pre-production and post-production, and they build this. That’s not me.

Okay, so the next question people always ask me is, “Do you get free stuff?”

I grew up in Cambridge, and one time I went into a store and I forgot my money and they gave me the dress for free. When I was a teenager, I was driving with my friend who was an awful driver and she ran a red and of course, we got pulled over, and all it took was a “Sorry, officer,” and we were on our way. And I got these free things because of how I look, not who I am, and there are people paying a cost for how they look and not who they are.

So, the last question people ask me is, “What is it like to be a model?” And I think the answer that they’re looking for is, “If you are a little bit skinnier and you have shinier hair, you will be so happy and fabulous.” And when we’re backstage, we give an answer that maybe makes it seem like that. We say, “It’s really amazing to travel, and it’s amazing to get to work with creative, inspired, passionate people.” And those things are true, but they’re only one half of the story, because the thing that we never say on camera, that I have never said on camera, is, “I am insecure.” And I’m insecure because I have to think about what I look like every day. And if you ever are wondering, “If I have thinner thighs and shinier hair, will I be happier?” you just need to meet a group of models, because they have the thinnest thighs, the shiniest hair and the coolest clothes, and they’re the most physically insecure women probably on the planet.

When I was writing this talk, I found it very difficult to strike an honest balance, because on the one hand, I felt very uncomfortable to come out here and say, “Look I’ve received all these benefits from a deck stacked in my favor,” and it also felt really uncomfortable to follow that up with, “and it doesn’t always make me happy.” But mostly it was difficult to unpack a legacy of gender and racial oppression when I am one of the biggest beneficiaries.

If there’s a takeaway to this talk, I hope it’s that we all feel more comfortable acknowledging the power of image in our perceived successes and our perceived failures.