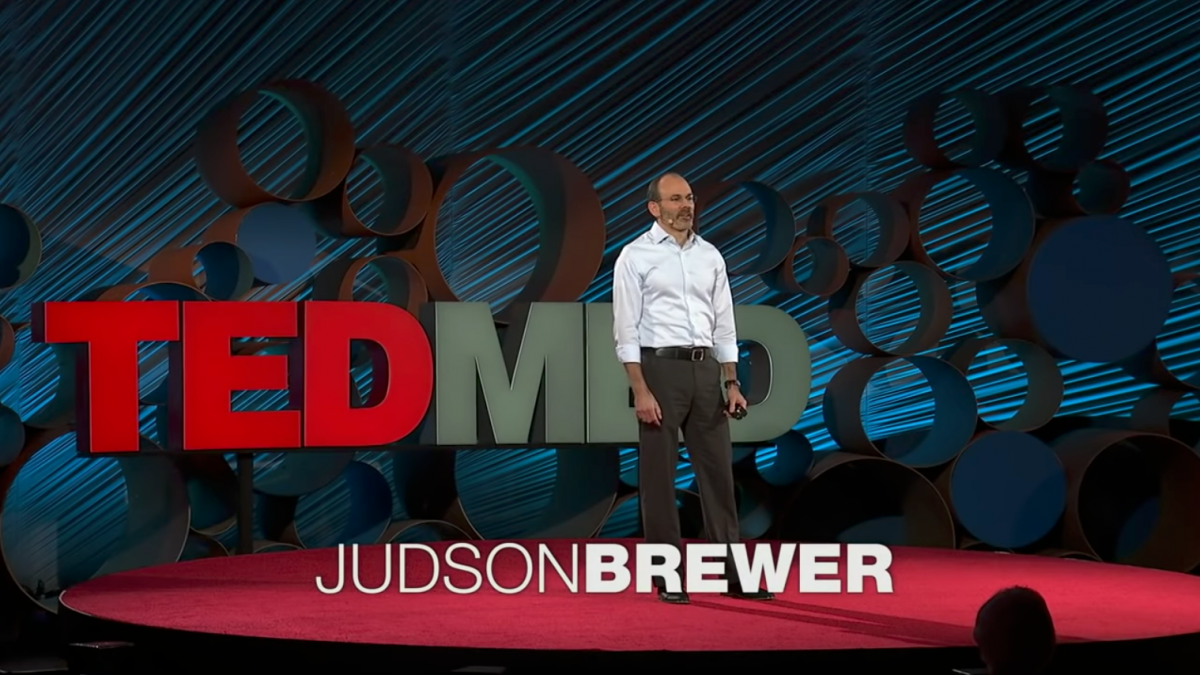 This reward-based learning process is called positive and negative reinforcement, and basically goes like this. We see some food that looks good, our brain says, “Calories! … Survival!” We eat the food, we taste it — it tastes good. And especially with sugar, our bodies send a signal to our brain that says,”Remember what you’re eating and where you found it.” We lay down this context-dependent memory and learn to repeat the process next time. See food, eat food, feel good, repeat. Trigger, behaviour, reward.

Maybe in our teenage years, we were a nerd at school, and we see those rebel kids outside smoking and we think, “Hey, I want to be cool.” So we start smoking. The Marlboro Man wasn’t a dork, and that was no accident. See cool, smoke to be cool, feel good. Repeat. Trigger, behaviour, reward. And each time we do this, we learn to repeat the process and it becomes a habit. So later, feeling stressed out triggers that urge to smoke a cigarette or to eat something sweet.

Now, the prefrontal cortex, that youngest part of our brain from an evolutionary perspective, it understands on an intellectual level that we shouldn’t smoke. And it tries its hardest to help us change our behaviour, to help us stop smoking, to help us stop eating that second, that third, that fourth cookie. We call this cognitive control. We’re using cognition to control our behaviour. Unfortunately, this is also the first part of our brain that goes offline when we get stressed out, which isn’t that helpful.

When the prefrontal cortex goes offline, we fall back into our old habits, which is why this disenchantment is so important. Seeing what we get from our habits helps us understand them at a deeper level — to know it in our bones so we don’t have to force ourselves to hold back or restrain ourselves from behaviour. We’re just less interested in doing it in the first place.

And this is what mindfulness is all about: Seeing really clearly what we get when we get caught up in our behaviours, becoming disenchanted on a visceral level and from this disenchanted stance, naturally letting go.

The paradox here is that mindfulness is just about being really interested in getting close and personal with what’s actually happening in our bodies and minds from moment to moment. This willingness to turn toward our experience rather than trying to make unpleasant cravings go away as quickly as possible. And this willingness to turn toward our experience is supported by curiosity,which is naturally rewarding.

What does curiosity feel like? It feels good. And what happens when we get curious? We start to notice that cravings are simply made up of body sensations — oh, there’s tightness, there’s tension,there’s restlessness — and that these body sensations come and go. These are bite-size pieces of experiences that we can manage from moment to moment rather than getting clobbered by this huge, scary craving that we choke on.

Now, this might sound too simplistic to affect behaviour. But in one study, we found that mindfulness training was twice as good as gold standard therapy at helping people quit smoking. So it actually works.

Now we’re testing app and online-based mindfulness training programs that target these core mechanisms and, ironically, use the same technology that’s driving us to distraction to help us step out of our unhealthy habit patterns of smoking, of stress eating and other addictive behaviours.

Now, remember that bit about context-dependent memory? We can deliver these tools to people’s’ fingertips in the contexts that matter most. So we can help them tap into their inherent capacity to be curiously aware right when that urge to smoke or stress eat or whatever arises.