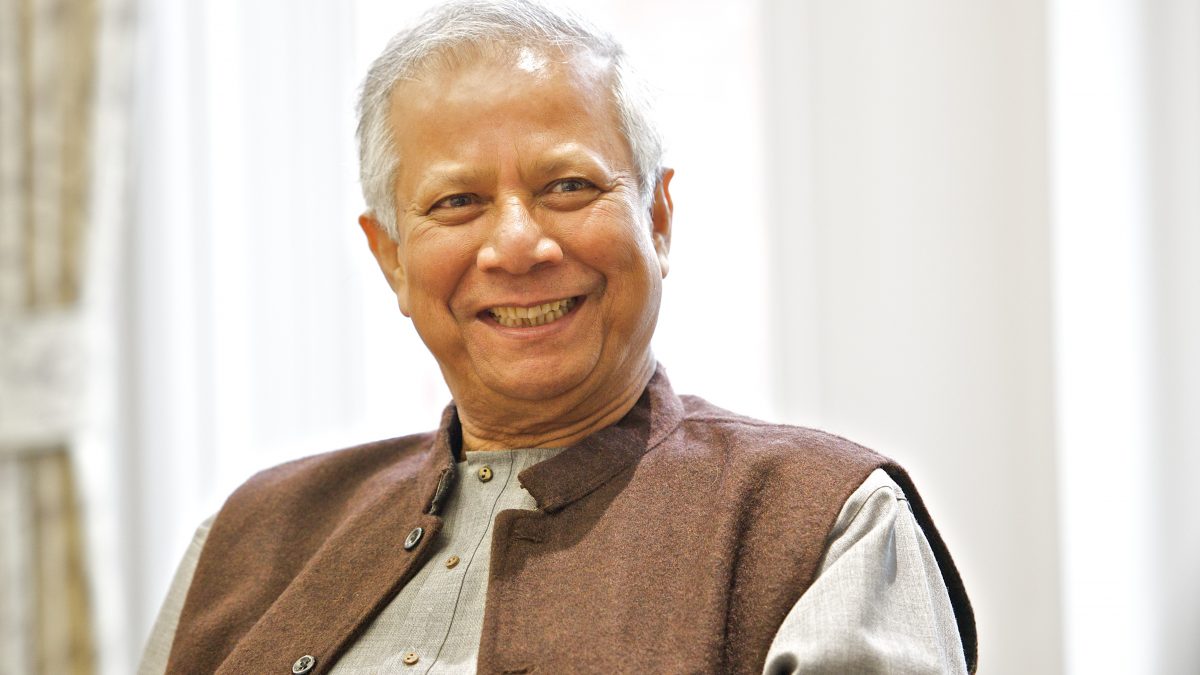 The third of nine children, Yunus was born on 28 June 1940 in the village of Bathua, which today forms modern Bangladesh. In 1944, his family moved to the city and he moved from his village school to a better one.  Later, he passed the entrance examination from Chittagong Collegiate School ranking 16th of 39,000 students in East Pakistan. In 1957, he enrolled in the Department of Economics at Dhaka University and completed his BA in 1960 and MA in 1961.

After his graduation, Yunus joined the Bureau of Economics as a researcher.  In 1965, he received a Fulbright scholarship to study in the United States. He obtained his PhD in economics in 1971. From 1969 to 1972, Yunus was assistant professor of economics at Middle Tennessee State University in Murfreesboro.

In 1976, during visits to the poorest homes in the village of Jobra near Chittagong University, Yunus discovered that very small loans could make a great difference to a poor person. Village women who made bamboo furniture had to take  loans to buy bamboo, and repay their profits to the lenders. Traditional banks did not want to make tiny loans at reasonable interest to the poor due to high risk of default. But Yunus believed that, given the chance, the poor will repay the money and hence microcredit was a viable business model. Yunus lent US$27 of his money to 42 women in the village, who made a profit of  US$0.02 each on the loan. Thus, Yunus is credited with the idea of microcredit.

In December 1976, Yunus finally secured a loan from the government  bank  to lend to the poor in Jobra. By 1982, it had 28,000 members. On 1 October 1983, the pilot project began operation as a bank for poor Bangladeshis and was renamed Grameen Bank  Village Bank”.

By July 2007, Grameen had issued US$6.38 billion to 7.4 million borrowers. To ensure repayment, the bank uses a system of “solidarity groups”. These small informal groups apply together for loans and its members act as co-guarantors of repayment and support one another’s efforts at economic self-advancement.[16]

More than 94% of Grameen loans have gone to women, who suffer disproportionately from poverty and who are more likely than men to devote their earnings to their families.

Yunus was awarded the 2006 Nobel Peace Prize, along with Grameen Bank, for advancing economic and social opportunities for the poor, especially women, through their pioneering microcredit work.

Yunus was the first Bangladeshi to ever get a Nobel Prize. After receiving the news of the important award, Yunus announced that he would use part of his share of the $1.4 million award money to create a company to make low-cost, high-nutrition food for the poor; while the rest would go toward setting up an eye hospital for the poor in Bangladesh.

“If all the wealth  of the world is equally shared among the 7 billion inhabitants of the planet, in less than 10 years the money will return to the same hands that hold it now”.