Reading and Writing – Tom is a top executive

Reading and Writing – A letter

Want to be happy? Be grateful – David Steindl-Rast 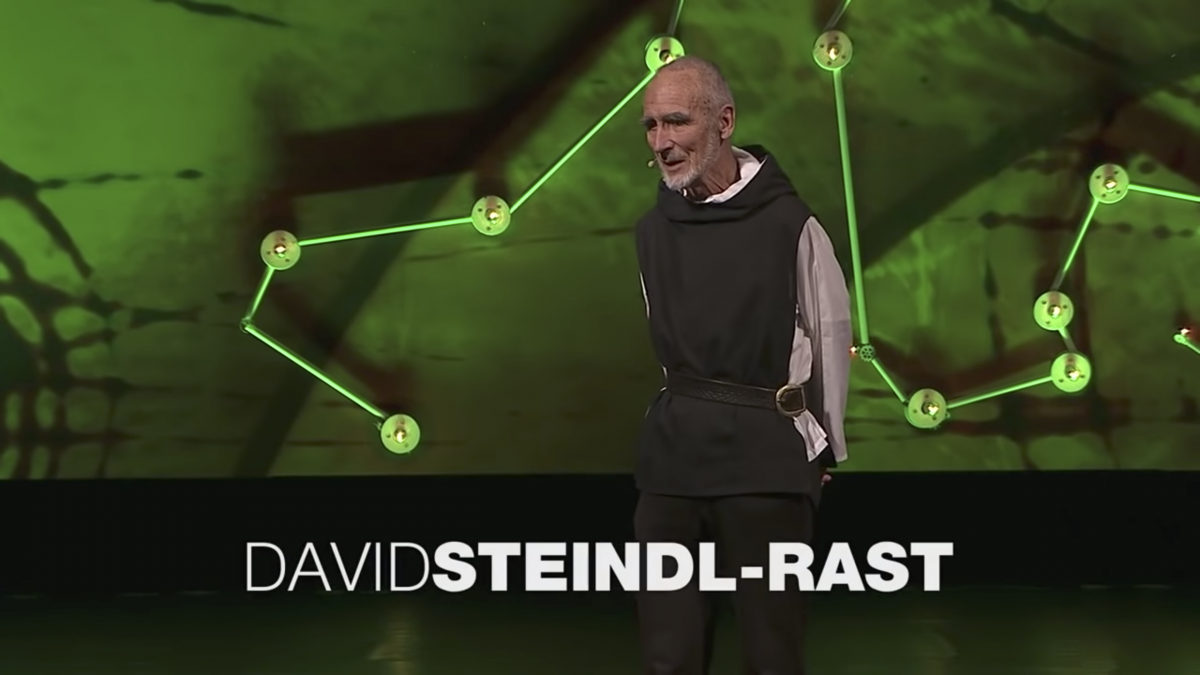 Want to be happy? Be grateful

Now, we can ask, what do we really mean by gratefulness? And how does it work? I appeal to your own experience. We all know from experience how it goes. We experience something that’s valuable to us. Something is given to us that’s valuable to us. And it’s really given. These two things have to come together. It has to be something valuable, and it’s a real gift. You haven’t bought it. You haven’t earned it. You haven’t traded it in. You haven’t worked for it. It’s just given to you. And when these two things come together, something that’s really valuable to me and I realize it’s freely given, then gratefulness spontaneously rises in my heart, happiness spontaneously rises in my heart. That’s how gratefulness happens.

Now the key to all this is that we cannot only experience this once in a while. We cannot only have grateful experiences. We can be people who live gratefully. Grateful living, that is the thing. And how can we live gratefully? By experiencing, by becoming aware that every moment is a given moment, as we say. It’s a gift. You haven’t earned it. You haven’t brought it about in any way. You have no way of assuring that there will be another moment given to you, and yet, that’s the most valuable thing that can ever be given to us, this moment, with all the opportunity that it contains. If we didn’t have this present moment, we wouldn’t have any opportunity to do anything or experience anything, and this moment is a gift. It’s a given moment, as we say.

But once in a while, something very difficult is given to us, and when this difficult thing occurs to us, it’s a challenge to rise to that opportunity, and we can rise to it by learning something which is sometimes painful. Learning patience, for instance. We have been told that the road to peace is not a sprint, but is more like a marathon. That takes patience. That’s difficult. It may be to stand up for your opinion, to stand up for your conviction. That’s an opportunity that is given to us. To learn, to suffer, to stand up, all these opportunities are given to us, but they are opportunities, and those who avail themselves of those opportunities are the ones that we admire. They make something out of life. And those who fail get another opportunity. We always get another opportunity. That’s the wonderful richness of life.

So how can we find a method that will harness this? How can each one of us find a method for living gratefully, not just once in a while being grateful, but moment by moment to be grateful. How can we do it? It’s a very simple method. It’s so simple that it’s actually what we were told as children when we learned to cross the street. Stop. Look. Go. That’s all. But how often do we stop? We rush through life. We don’t stop. We miss the opportunity because we don’t stop. We have to stop. We have to get quiet. And we have to build stop signs into our lives.

When I was in Africa some years ago and then came back, I noticed water. In Africa where I was, I didn’t have drinkable water. Every time I turned on the faucet, I was overwhelmed. Every time I clicked on the light, I was so grateful. It made me so happy. But after a while, this wears off. So I put little stickers on the light switch and on the water faucet, and every time I turned it on, water. So leave it up to your own imagination. You can find whatever works best for you, but you need stop signs in your life. And when you stop, then the next thing is to look. You look. You open your eyes. You open your ears. You open your nose. You open all your senses for this wonderful richness that is given to us. There is no end to it, and that is what life is all about, to enjoy, to enjoy what is given to us.

But whatever it is, if we take this opportunity, we go with it, we are creative, those are the creative people. And that little stop, look, go, is such a potent seed that it can revolutionize our world.Because we are at the present moment in the middle of a change of consciousness, and you will be surprised if you — I am always surprised when I hear how many times this word “gratefulness” and “gratitude” comes up. Everywhere you find it, a grateful airline, a restaurant gratefulness, a café gratefulness, a wine that is gratefulness. Yes, I have even come across a toilet paper whose brand is called “Thank You.”

There is a wave of gratefulness because people are becoming aware how important this is and how this can change our world. It can change our world in immensely important ways, because if you’re grateful, you’re not fearful, and if you’re not fearful, you’re not violent. If you’re grateful, you act out of a sense of enough and not of a sense of scarcity, and you are willing to share. If you are grateful, you are enjoying the differences between people, and you are respectful to everybody, and that changes this power pyramid under which we live.

And it doesn’t make for equality, but it makes for equal respect, and that is the important thing. The future of the world will be a network, not a pyramid turned upside down. The revolution of which I am speaking is a nonviolent revolution, and it’s so revolutionary that it even revolutionizes the very concept of a revolution, because the normal revolution is one where the power pyramid is turned upside down and those who were on the bottom are now on the top and are doing exactly the same thing that the ones before. What we need is a networking of smaller groups, smaller and smaller groups who know one another, who interact with one another, and that is a grateful world.

A grateful world is a world of joyful people. Grateful people are joyful people, and joyful people — the more and more joyful people there are, the more and more we’ll have a joyful world. We have a network for grateful living, and it has mushroomed. We couldn’t understand why it mushroomed. We have an opportunity for people to light a candle when they are grateful for something. And there have been 15 million candles lit in one decade. People are becoming aware that a grateful world is a happy world, and we all have the opportunity by the simple stop, look, go, to transform the world, to make it a happy place. And that is what I hope for us, and if this has contributed a little to making you want to do the same, stop, look, go.